Schindler awards Lancor 2000 S.Coop. as one of its top suppliers of the year

You are here:
Uncategorized 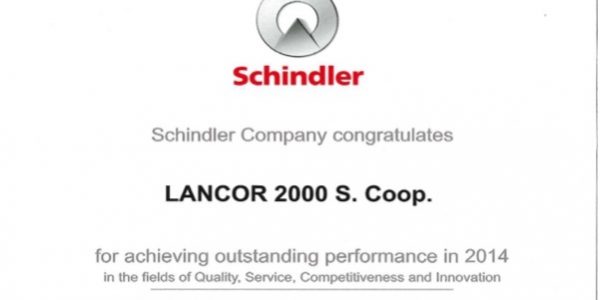 Schindler awards Lancor 2000 S.Coop. as one of its top suppliers of the year

Schindler’s “Supplier Award 2014” event took place on Wednesday, April 15th, at the Zaragoza Factory – Schindler Drive Systems. The Swiss multinational organized the awards with the purpose of recognizing excellence within the industry.

Among the 250 global suppliers who work with Schindler’s factory in Zaragoza, the Swiss company awarded LANCOR 2000 S.Coop. as one of the best 10 suppliers in 2013. Quality, competitiveness, service and innovation are some of the driving factors behind the second edition of the Schindler Supplier Award.

Any cookies that may not be particularly necessary for the website to function and is used specifically to collect user personal data via analytics, ads, other embedded contents are termed as non-necessary cookies. It is mandatory to procure user consent prior to running these cookies on your website.